With a per capita income of $3,815, although Sri Lanka is known as one of the fastest growing South Asian island nations, it has been going through economic turmoil for the past few years. With a literacy rate of 95 percent, the country currently has an inflation rate of 17.50 percent and an exchange rate of 307 Sri Lankan rupees per dollar. In the past two years, the country’s foreign exchange reserves have fallen 70 percent to $2.31 billion. Even after standing in line for hours and paying high prices, there is not enough food, gas, and oil, neither edible or fuel. The situation is such that the country has canceled examinations in all educational institutions due to a lack of paper and ink. On the other hand, due to the lack of fuel, the public transportation system has collapsed, and the country has not been able to generate enough electricity. Also, the country is facing a 13-hour power cut for the same reason. In addition, major surgeries are having to be canceled due to a shortage of medicine. On April 12, the Sri Lankan government declared its inability to repay the country’s total foreign debt of 51 billion dollars and temporarily suspended all payments. But, what exactly caused such a catastrophe in the Sri Lankan economy?

Formerly known as Ceylon, Sri Lanka gained independence from the British on February 4, 1948. In 1972, the country was officially renamed as Sri Lanka. With an area of 65,610 square kilometers, the country has a population of over 23 million (23,044,123) and a literacy rate of 95 percent. However, only 19 percent of the country’s population lives in cities, and the urbanization rate is only 1.22 percent.

However, various development projects have been going on in the country for the last few years. The notable mega projects in the country include the Hambantota seaport and Hambantota airport, wind power generation project, Havana-Veyangoda transmission line project, Bandaranaike International Airport development project, and Colombo port city development. Surrounded by sea and with huge tourism potential like Dubai and Singapore, the country wanted to attract tourism and international business through Colombo Hi-Tech Port City which consist of Marina, Financial Center, and residential areas like. 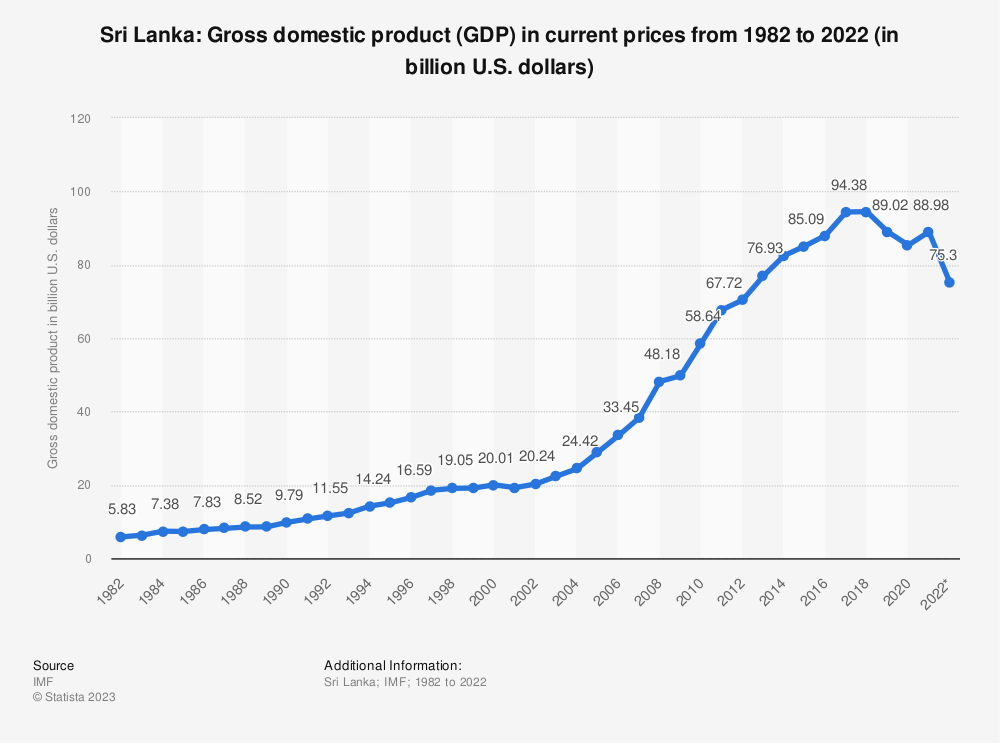 In such a situation, there has been a huge crisis in the country’s food, edible oil, gas, and fuel oil. The country is experiencing power outages for 10 to 13 hours every day. Fuel shortages are causing vehicles to become stuck anywhere. The price of cooking gas has gone up from 1,130 Sri Lankan rupees to 4,000 Sri Lankan rupees. Prices have risen for every essential food, even for powdered milk for small children. Even after standing in lines for hours, ration, oil, and gas are not being available due to a lack of adequate management. In fact, two people were killed in two different cities across the country while waiting in line for oil. To tackle the crisis of daily commodities, the government has appointed a ‘Controller of Civil Supplies’. On the contrary, the Sri Lankan government has recently declared an ‘economic emergency.’

The main reasons for Sri Lanka’s economic suffering include borrowing money for various non-profit projects, reducing the country’s food security through compulsory ‘organic farming’ in the agricultural sector, and failing to overcome the effects of the Corona epidemic.

Over the past few years, Sri Lanka has received assistance from various countries around the world to implement several mega projects. But Sri Lanka has taken this help as a loan and not as a foreign direct investment.

Since some of these projects did not have any economic viability, the country could not generate any revenue from those projects after completion. As a result, the country could not repay the loans for the projects. For example, the country leased the port of Hambantota to the Chinese company China Merchants Port Holdings Company Limited or CM Port for 99 years for $1.2 billion. Still, no cargo ship arrived as expected, and eventually, no revenue was generated from the port.

Similarly, the $253 million Hambantota airport was left empty as it failed to bring in any airlines. After the completion of most of the projects undertaken in the country, it is seen that there is not enough demand in the country for the projects yet, or due to not evaluating the projects correctly, they are not generating sufficient revenue. However, the country’s government has not stopped taking unnecessary loans for megaprojects. According to Channelionline, Sri Lanka has issued International Sovereign Bonds for funding since 2007. Such sovereign bonds are financed by selling them on the international capital market when the expenditure exceeds a country’s income. However, before doing so, Sri Lanka did not think about how it would repay the issued bonds after they matured. The country currently has a debt of $12.5 billion. According to a BBC report, Sri Lanka must repay a deficit of about $7 billion this year and $12.5 billion in international sovereign bonds. The lack of adequate foreign reserves has made it almost impossible for the country to repay these loans.

Meanwhile, the current government of the country, after being elected in 2019, reduced the amount of VAT from 15 percent to 8 percent. Although the country’s economy was expected to boost, the country’s public revenue has begun to decline. Meanwhile, other sources of income for the Sri Lankan government, such as tourism, remittances, and other sectors, were cut off when the lockdown began in late 2019 due to the global Corona epidemic. According to Sirimal Abeyratne, a professor of economics at Colombo University, “the reduction in VAT reduces government revenues by up to 25 percent. As a result, the Sri Lankan government is forced to borrow more.”

On the other hand, due to the epidemic, many Sri Lankan workers working in different countries lost their jobs and were forced to return home, resulting in a low inflow of remittances. On the other hand, when the outbreak became severe, most of the country’s garments, factories, and tea gardens were forced to close down. As a result, the country’s export sector also began to collapse. In addition, the country’s two main exports, cardamom and cinnamon, have been hit hard by the epidemic. As a result, foreign exchange earnings for Sri Lanka have almost stopped.

Moreover, the sudden change in the agricultural sector, which contributes an average of about 8 percent (7.96) to the country’s GDP every year, is another reason for the country’s economic downturn. After coming to power in 2019, President Gotabaya Rajapaksa decided to start organic farming in Sri Lanka. As a result, the use of chemical fertilizers and pesticides in cultivating any agricultural product is completely banned. In addition, the country is banned from importing fertilizers. Consequently, in addition to the negative impact on the country’s agricultural sector, the production volume decreased by 20 percent.

As a result, Sri Lanka, once self-sufficient in rice production, was forced to import $450 million worth of rice from abroad. And, naturally, since rice has to be imported, the price also goes up abruptly. But it was not only limited to rice. Instead, the adverse effects of organic farming can be seen in the country’s tea production. Tea production declined sharply, and exports fell rapidly, which affected Sri Lanka’s tea export earnings. Although the Sri Lankan government has paid $200 million in compensation to farmers for their losses, food shortages are still persistent across the country.

As for the failure of organic agriculture in the country, Sirimal Abeyratne, a professor of economics at Colombo University, said, “Enough research was not done before starting organic farming; hence it failed.” He also added that “Rural farmers have suffered due to declining crop production. As a result, food prices have risen, and the country has had to spend a lot more on imports to meet food demand, which is a significant factor in the country’s current economy.”

These factors show that the country’s foreign reserves are gradually declining due to debt repayment, declining foreign remittances, failure to attract foreign direct investment, collapse in tourism, and decreasing export earnings. As a result, Sri Lanka’s currency has depreciated against the dollar. Furthermore, due to insufficient foreign reserves, Sri Lanka has been unable to import food items and essential commodities, including fuel oil. This led to the country’s inflation rate rising to 17.5 percent. Hence, the country is now on the verge of bankruptcy. Because of these reasons, on April 12, 2022, Sri Lanka’s ministry of finance suspended all kinds of foreign debt payment. However, the country’s finance minister did not provide any further information about the suspension period. As a result, Sri Lanka will now collaborate with the International Monetary Fund or IMF to restructure the country’s financial condition. Will Sri Lanka be able to overcome bankruptcy?

ABOUT US
Business Inspection is all about sharing information with the people, who have interests and concerns about business, industry trends, global economy plus insight and analysis into the world's top companies.  Business Inspection aims to carry out research, case studies, analysis, news, facts,  overall business trends, and insights around the world.
FOLLOW US
© Copyright 2021© Business Inspection | All rights reserved |